I didn’t really want to write about us being gone while we were gone and away from the house, but we will be back home in a few hours so I thought I’d mention that we have been rumbling around the states for the last couple of weeks in our RV with our greyhounds.

We went to my parents house as my Mom has finished her radiation treatments, only to find my Dad with two injured feet, one of which had broken bones. So it was good we went and *I* think the timing was fine, but my Dad didn’t. He had 3 people after him then to take proper care of himself…which left him basically no choice. With that many people after you, you almost have nothing else you can do but comply.

We also spent a couple of days at Fort Wilderness while we were down there and the rest of the time, except for the first 2 nights, the rig was parked out at Griffin State Park. This is a very nice park, a photo of the road we were camped on is below.

Going down was lovely weather, but then one of our Greyhounds, the eldest, Blew started having problems, so he had emergency vet appointment first thing in the morning when we got there. The vet put him on some meds and he is much better. They had x- rayed his leg, as it was swollen twice the size it should have been and bone cancer was suspected – but not so, he has beautiful bones, no sign of cancer so we were pleased. The medication really helped and he has been doing very well since.

I continued my classes on-line, while I was there so it was not a ‘work free’ experience. I stayed up quite a few nights until after 1 am doing school work.

Coming home has been anything but free and easy. Storms had broken out from south to north in the mid-portion of the country.

The brunt of the poor weather was in Tennessee where we were headed through to get to Paducah, Kentucky to bed down for the night. Stopped for gas outside of Clarksville and tornado sirens were going off. Got the dogs out for a quick walk in a sprinkling of rain and winds that were picking up by the minute. Finished gassing up and we were off toward Clarksville, not knowing what else to do but head onward in the direction of home. Considering the storm just kind of kicked up violently all around us we just kept moving hoping to move out of it.

However, it was not to be the case as just a few miles south of Clarksville we were caught in a mini tornado that sent rain, wind and small tree branches swirling around us as it rocked the RV and made it hard to see. It was actually very terrifying, we were pretty much all over the road and creeping along. Then it was gone and still heavy rain and wind prevailed. The wind remained heavy as we drove down the road passed Clarksville and on toward Paducah. There were several tornados moving through the area and one of them hit pay dirt as it picked up an empty semi ahead of us and threw it on its side. 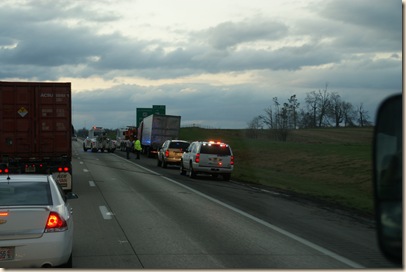 Traffic stopped completely in all lanes as we all waited for the tow trucks to come and remove the semi from the road. It was a scary bit of time as we sat feeling rather trapped in the jammed up traffic, the RV rocking, at times violently, with the strong gusts of wind. We saw storm chasers zoom by us on the side of the road as they chased the elusive funnels. Finally we were underway again and the wind did not give up on pushing us all over the road for the next hour or so until we got to our over-night spot. It was dark and we were continuously concerned about being tossed over on our side, which added to the worry of just keeping it on the road. We did make it of course, but were pretty shaken up in the process.

This morning we found the weather much the same with not only rain, but snow as well. Though the winds have still been pretty hefty and the temps have dropped considerably from when we left to travel south from Minnesota, they have not been as frightening as yesterday evening. The winds have been heaving us around all day so far (we are about 4 hours from home at this point) and we understand that we will just be beating a snow storm into Minnesota (comes tomorrow – Monday), so we are thankful for that. It will be so good to be home again.