On our vacation this year we went to Disney World, which included a trip to Downtown Disney. While there we stopped to eat at a place that was full of Dinosaurs. Was a pretty neat place, unfortunately I didn’t get the best pictures of it as it was always turning different colors.

This was the place: 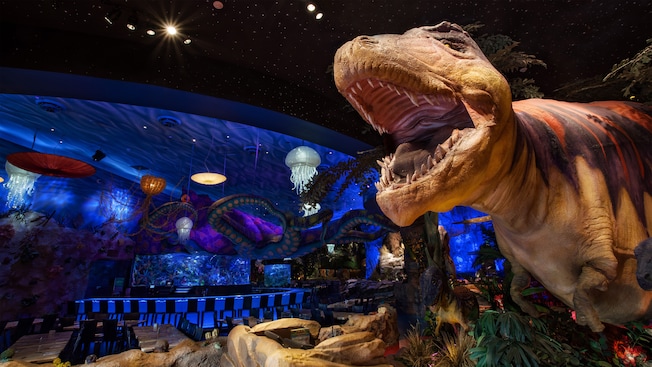 Wish I would have gotten better photos, but hopefully this gives you an idea of the place.

This weekend was the first camping trip of the season, of course it had snowed earlier in the week. That is *our* camper in the above photo.

Mandy wanted you to know that even though it was 70 degrees, the piles of snow were still getting in her way sometimes. She tried to stay off the white stuff!

We were camping at William O’Brian. Not too far from where we live, as our kids were going out on their first trip with their brand new camping trailer.

My oldest daughter with Ruby, our grand-greyhound and LIttle Guy being inspired by the beauty of the St. Croix River. It separates Minnesota (where we live) from Wisconsin.

Mandy playing it cool after a long hike.

Geo-caching causes you to do some things you don’t do in every day life. That is my ,daughter in that tree, the prize we were tracking was hung high up in the branches!

Humm…. as always many navigators!

LIttle Guy trying out a little pine tree Climbing, with a little help from his Bampa!

Was a beautiful weekend as we had received several inches of snow on Monday (think it was), then were hiking in 77 degree weather most of the weekend.

This what I saw driving to work yesterday morning.

Not easy to see the traffic lights either.

Seriously, spring has yet to be sprung and there is much anticipation.

This sort of weather has kept us doing inside things such as bowling.  This is how Little Guy Showed up at my door.

Of course we went bowling….

Kids in a jar!

Little guy also had his 6th birthday and we were over at Pump It Up where they have all manner of entertainment to occupy the mind of a child (no matter how old the ‘child’ is). Also a place where a lot of the things to play with are not played with in the manner of which they were meant to be used.

This is supposed to be Skee Ball.

Snow storm again!!! It was all melting and now this storm is supposed to leave us with another 9 inches of snow!  YUCKO!

Little Guy is my Grandson and spends the weekends with us from time to time. Never know what will be going on around here from one moment to the next. This battle took place in late February I believe. He won!

What a motley crew these Minnesota Hockey players are!

Little Guy is middle, with the Hockey glove up by his face holding his stick.

Love watching these guys play, they are so much fun to watch.

End of the season in the locker room. He plans to continue in the Summer league. (or whatever they are calling it.)

More to follow (the one next to it is loose as well)!

Ok…so we live in Minnesota.  We expect snow and cold in the winter time.  However, here it is the 19th of April and this is what the long, slow drive home looked like:

These are taken through my windshield, so not the best clarity.

Yep I have ALL the time in the world so you guys just hang out in the middle of the road…I’ll wait.

Finally…. now I can get the rest of the way home!

But of course they are hanging out in my backyard as well.

I think the deer are as bummed by this *long* winter as we people are.

This is the longest one we have ever had hanging from the roof.

Though it has melted, we still are getting the snow. Not all that normal this time of year, even in Minnesota, to still be having snow storms. However, we do have one coming tomorrow.  Will winter *ever* leave us alone this year!!!